Malea
A roller girl with a day job and a pottery studio making her way in the world. :)

WOW! So much stuff!

Wow it has been almost a month since my last posting. Sorry everyone. Been moving, unpacking, painting, patching, more painting and getting things finished up for Snow Farm. Which started this weekend! So much stuff to see out there, everyone should go at least once. It runs for 3 weekends, so plenty of time for everyone to squeeze it into their schedule... And buy my pottery...or at least buy something wonderful and hand made even if it isn't mine! Support your local artists. We are a dying breed!
So last week Jim, my Wednesday night student helped me take this picture of the kiln when it was going...You can even read the temperature on the read out. 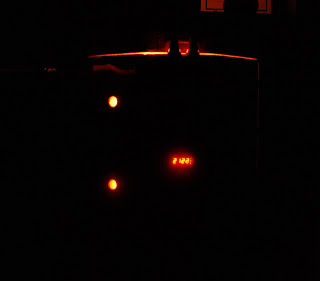 Tonight I loaded the kiln and the entire bottom and second shelf belong to Jim! He has turned out so much stuff and really taken off. This is some of his work glazed, not yet fired. That will happen tomorrow. 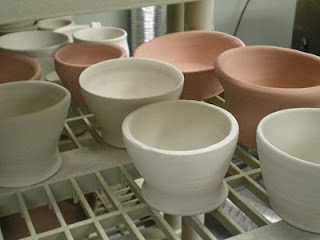 These are 2 of KT's Pots that have been glazed and fired. 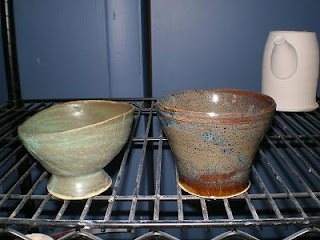 A few years ago (back when I had free time) I made the staff at WEBS, sheep holiday ornaments. Kathy (one of the owners) had mentioned that she would be interested in selling them in the store. So last week I started the process of making them. This is the first run, I have done them with raised up, or slip trialed designs, carved designs, and slip trailing over carving. We'll see how they turn out and which ever ones get the best feedback I will make a couple dozen to sell at WEBS. 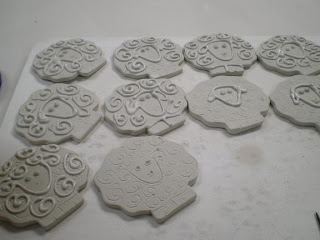 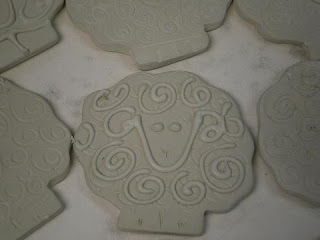 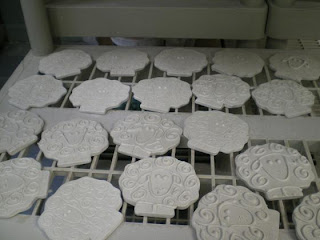 I am going to turn on the kiln tomorrow....and inside are all of the plates for Melissa Morgan Oakes. They will be done and ready to give to her by Wednesday. One more thing down!

And I have to say that while I have been getting settled in my new home I have been knitting up a storm! My most recent finished project is this felted pillow. Knit in Brown Sheep Burly Spun. 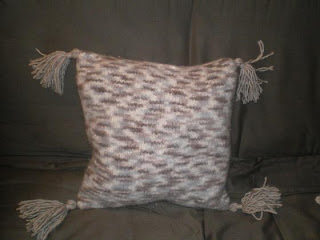 And lastly, I have been working really hard to get wine glasses ready for my little house warming gathering. And it is now down to the wire. None of them have come out just the way I wanted...which usually turns out to be the first ones to go oddly enough. 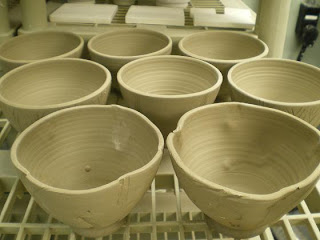 But I have done a bunch of them in all different styles and will glaze them differently. Some of them are in the new "damaged goods" line. Some others are more traditional. But they have all got to be done by this Friday.

Guilt over sweater is falling under the wheels of the book bus. Show me, but do not give me the plates. Hold them up, ooooh and aaaah, and don't even let me TOUCH them.